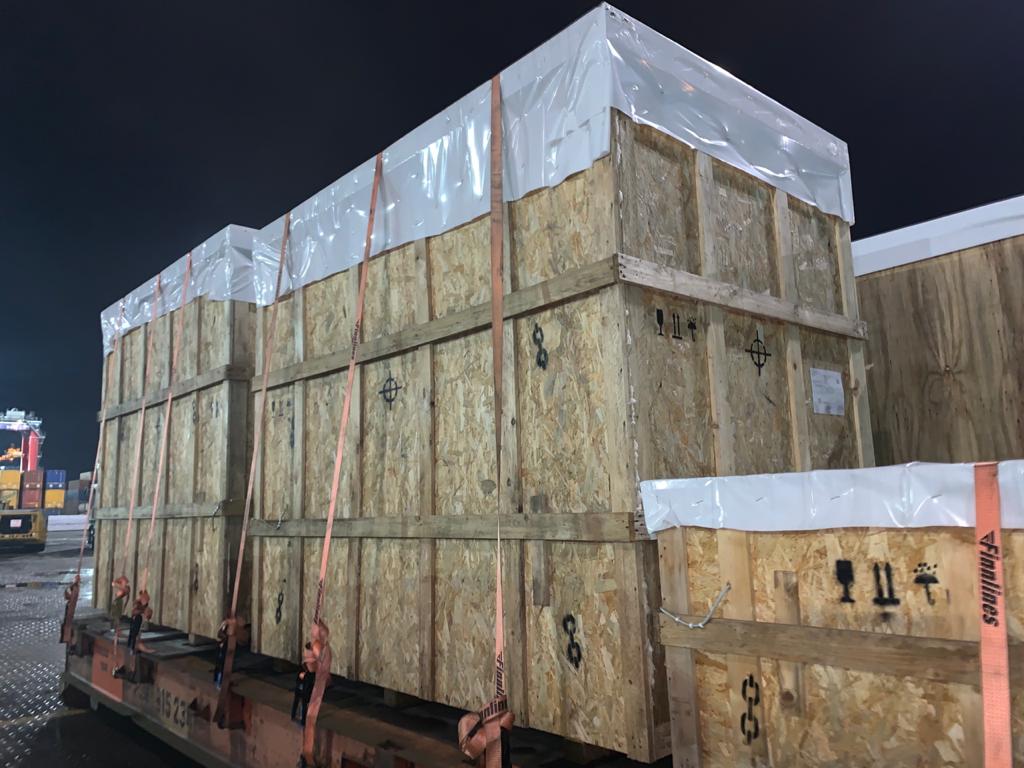 On February 4, specialists of OKB “Spetstyazhproekt” delivered 6 vehicles with equipment for PJSC “Novatek” to Ust-Luga. The shipments came from Japan, the Czech Republic and Italy.

The company’s specialists worked simultaneously at different ends of the Eurasian continent.

Storage of goods in Europe lasted until December 12, as the ambient temperature was acceptable for storage.  After it got colder there, the goods were sent to Russia by ship on roll trailers. The vessel was sailing along the route Lubeck port – Bronka port (St. Petersburg).  After arriving at the port of Bronka, the equipment was promptly placed in a covered warehouse and, in order to maintain the optimal storage temperature, the heaters built into the cargo were connected to the network. The technical capabilities of the port of Bronka did not allow placing the equipment.

Specialists examined all temporary storage warehouses in St. Petersburg and Ust-Luga. The Yanino Logistic Park turned out to be suitable for the requirements (warm warehouse from + 5C degrees). On December 28, it was decided to transport Japanese equipment from Ust-Luga and European equipment from the port of Bronka to Yanino in the customs transit regime. The subsequent customs clearance was to take place here.

Putting the equipment into storage was complicated by the size of the heat-loving cargo (width 3.5 m, length 6 meters, height 3 meters). The openings of most warm warehouses were not ready for such dimensions. Those warehouses that had the technical capabilities were occupied. The equipment that did not fit in the warm warehouse was installed on a covered site with the ability to quickly connect the heaters to the network when the temperature drops below -20C degrees.

Customs clearance work began on January 11 and lasted until February 4.

On February 5, all equipment from the warehouse in Yanino was sent to the village of Vistino. By agreement with the manufacturers, it was allowed to transport equipment, without connecting to the network of built-in heaters, for a period not exceeding 5 hours. The transportation was complicated by bad weather conditions in the Leningrad region. The whole process of loading, transportation and unloading at the warehouse of Novatek-Ust-Luga LLC took 4 hours.