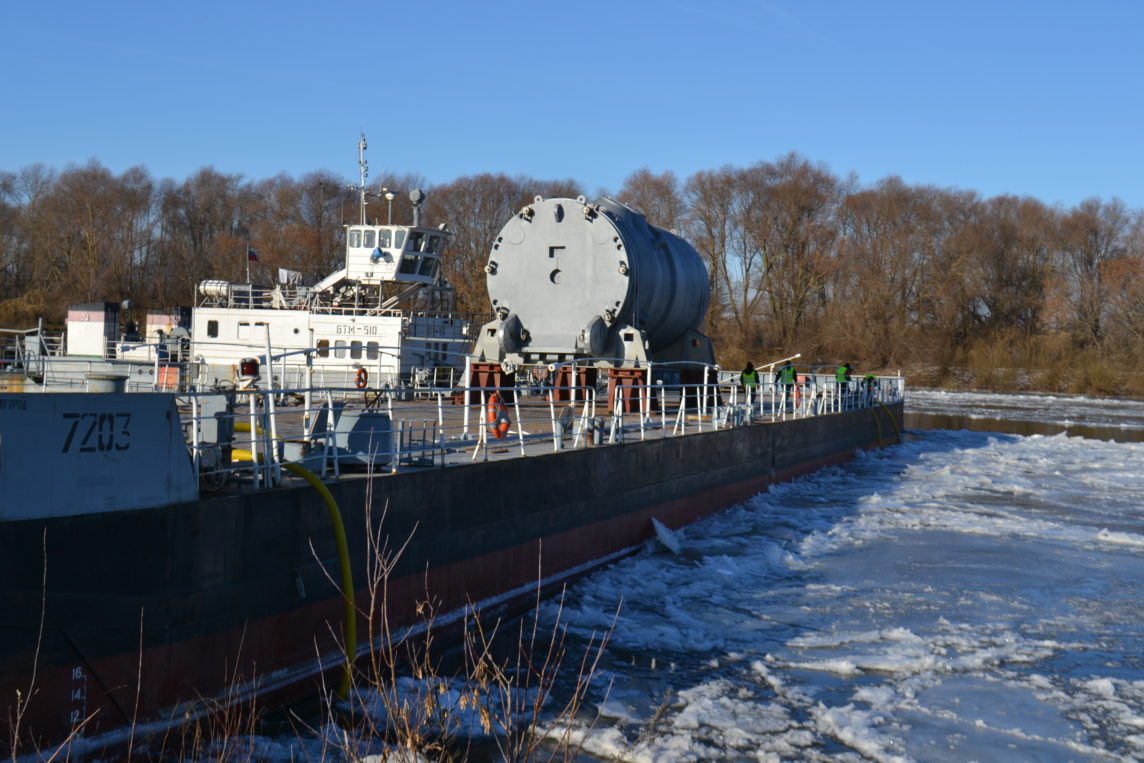 Reactor vessel for Belarusian NPP has been delivered in Novovoronezh

To the mooring of the New Voronezh nuclear power plant arrived the reactor vessel for the Belarusian NPP. On the way of a multiton construction it is some kind of transshipment point. Further it will go by rail to the destination. Eight hours were required to overload the three hundred-ton vessel from the barge on the earth.

“The most difficult – the river piece of a way is passed. The barge with the reactor vessel moored in the Novovoronezh. Specialists perform the most difficult operation on an overload of a multiton construction. A couple of days more and it would be impossible to perform such works”.

To be in time till the freeze-up, it was necessary to force works at the plant in Volgodonsk. The vessel of the reactor was handed over for three months before term. Also floated on November 1.

“According to the schedule production of the reactor and its shipment it was planned for spring of the 17th year, but at the request of the customer – the Belarusian NPP, we performed shipment. Worked in several changes”.

Through the Tsimlyansk Reservoir on the twisting riverbed of Don against the current – nearly 1000 kilometers of a way behind. The barge overcame distance in 20 days, moving about the pedestrian’s speed. The river shoaled, representatives of transportation company say. Therefore ahead it was necessary to launch the dredge, paving the way slowly, meter behind meter

“Found the place where it is necessary to dig, dug the channel in order that the towing structure passed. It was places so close to the coast that we touched bushes and trees which grew ashore”.

On a piece of a way from Volgodonsk to the Novovoronezh is the only possible option of transportation, specialists say. Here the barge arrived still yesterday, and today with early morning began preparation for an overload on the coast.

“The Belarusian guest” will stay in the Novovoronezh some more days. During this time the vessel of the reactor will be overloaded and fixed on a railway platform. Assume that the construction will cover the remained distance in 30 days.

Alexey Krupsky, deputy chief of the reactor workshop of the Belarusian NPP:

“The Belarusian NPP is planned to be the main entity energy the countries. Therefore behind the equipment it is controlled serious, careful, our specialists accompany it at all stages”.

Several hours were required to execute jewelry operation: it is ideal to moor exactly the barge and to accurately transport the equipment on the coast. On the Belarusian NPP “power unit heart” wait by new year.